Robin Huw Bowen is an artist who represents the very soul of the Welsh musical tradition. Drawing on his own long research, and using authentic techniques learned from living sources, he brings together the different strands of tradition, to give new vital expression to the music of Wales.

Contemporary attitude often suggests that safeguarding one’s heritage is little more than ‘living in the past’, but far from merely demonstrating dusty museum relics, Robin’s inspired playing ensures that he rekindles the very soul of the music and delivers it as a living entity to his listeners. Although he is prepared to push the recognized limits of tradition, and to extend himself musically, Robin never compromises the integrity of that tradition. His interpretation and playing are enhanced by the depth of his own personality and by the power of an artistry shaped by his own individuality, but yet still rooted in centuries of Welsh music. The audience is presented with the true sound and nature of Welsh tradition, reflecting perhaps an earlier aesthetic, but as vibrant and as colourful as it ever was. 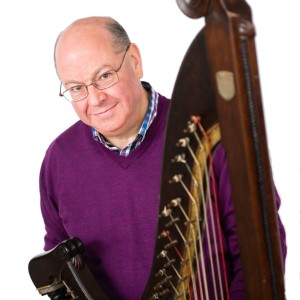 For over twenty-five years Robin has carved out a career as the only full-time professional Welsh Triple harpist, and has introduced the Welsh Triple Harp and its music to thousands all over the world. He has researched, recorded, and published many old ‘lost’ Welsh airs, and his influence on the world of Welsh folk music and harping has indeed been far-reaching. He ranks among the most important figures that the Welsh folk tradition has ever produced, and it is no surprise therefore that he is recognized as today’s leading exponent of the Welsh Triple Harp and its music.

For the significant dates in Robin's life and career, see Timeline