The idea of a harp having two rows of strings to facilitate chromatic playing was certainly known in Renaissance Spain and Italy, but the design of having three full rows – two rows of diatonic unisons with the third row sustaining the accidentals in the middle, making them playable by either hand – was devised in Italy during the late Renaissance.

The Triple Harp then spread through Europe and became the harp of the Baroque, as used by Monteverdi and later Handel. It reached London in England by the middle of the 17th century, where Welsh harpists had been accustomed to travel ever since their traditional patrons amongst the Welsh gentry had turned their interests there after Henry VIII’s English annexation of Wales in 1536. They certainly would not have been averse to taking up the latest Continental fashion in music and instruments.

When it was then brought home to Wales, the Triple took hold amongst the harpists in the north initially, in Meirionnydd in particular. By the middle of the 18th century, having fallen out of use in the rest of Europe, it was crowned as the national Welsh harp by the antiquarians of the period, its actual history (either genuinely or conveniently!) forgotten.

But despite its Italian roots, the Triple Harp settled firmly in Wales, and was accepted and indeed nurtured as a Welsh instrument. Its style of playing, a common repertoire, and the interpretation of its music were all forged by our native creativity over time into something particularly, and eventually recognizably, Welsh. As a result, it is fair to say that the Triple Harp is the only true Welsh harp. By now unique to Wales as a still unbroken oral folk tradition for over three hundred years, the ‘shimmering’ voice of its three rows of strings is truly as unique as the Welsh language itself. 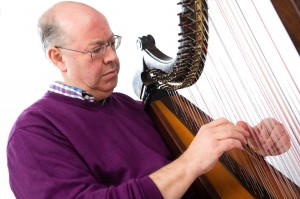 (Trans: Senate of all discord – the two sides
Of joyous unisons,
All passion there weaving
The Language of the Soul on her strings.)

“Though the shape of the instrument is familiar, the fundamental design and playing style is quite unlike the modern orchestral instrument. Modern harp music is often accompanied by frenzied tap-dancing by the player as they alter the length of the strings via the seven foot pedals, and is characterised by the long cascades of glissandi which we remember from the Marx Brothers movies.

The Welsh Harp is an altogether more gentle instrument – its vast number of strings allows a design without pedals, and its quiet, almost mystical tones suggest that the ‘improved’ modern instruments have forever lost something vital. …

Throughout the concert I was struck by the unique playing style of this harp – complex two-part playing and a technique of echoing the tune between the hands was unlike other harp music I have heard.” 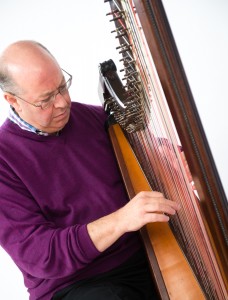 “The gracious appearance of the Welsh triple harp utterly fails to prepare the listener for its robust tone. It is noticeably taller and more densely strung than the Celtic or Irish harps, since it has three courses of strings to the more familiar Irish harp’s one.

It can play just as delicately, but upon the Irish harp’s transparency it can also overlay the richer sonority of a double harp, and the versatility of an additional middle row for the in-between notes. Whereas the Irish harp calls up images of mist and haunted romances – when it isn’t playing a jig or reel – the Welsh triple harp repertoire of hornpipes, resonates with a darker, gypsy-like energy. It’s as danceable a repertoire as that of Irish or Scottish fiddle, but more in the way of whirling on the moor by the firelight than stepping it out in a lamplit kitchen.”